Unleash Your Potential
Home Why You Should Apply Early
OurBlog 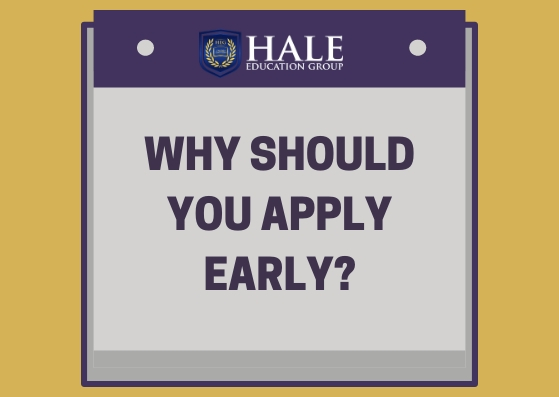 Why You Should Apply Early

In the endlessly complicated alphabet soup that is American university admissions, there are three acronyms that every prospective applicant needs to be familiar with as they lay out their application strategy: ED (Early Decision), EA (Early Action), and RD (Regular Decision). What do each of these phrases mean, what are their ramifications for applicants to US universities, and what are the benefits of a student applying early to a university?

Another compelling feature of applying Early Decision is that ED applicants receive their results in mid-December, and are thus spared the months-long wait that Regular Decision applicants have to endure until their results are released in March and April. Keep in mind that not all universities will offer the Early Decision option to prospective students; some will have only Early Action and Regular Decision options.

With these and many other factors in mind, whether or not to apply Early Decision (and then, furthermore, where to apply Early Decision) is one of the weightiest choices that a student has to make during the application process. For students who have a dream university that they would not turn down for any other institution, Early Decision is a fantastic option that allows them to bolster their chances at a school that may lie just beyond their academic reach.

For students who do not feel comfortable fully committing themselves to one university, Early Action is a prime opportunity to get a headstart in the application process and, in the event of an acceptance or acceptances, enjoy peace of mind for a greater part of the school year. While the admissions statistics for Early Action applicants versus Regular Decision applicants are not tracked as closely as Early Decision, it is still undeniable that applying Early Action can only positively impact a student’s chance of acceptance, particularly if they are not waiting on a late standardized test score or Grade 12/Year 13 report card to buoy their academic profile. The Early Action applicant pool will almost certainly be smaller than the Regular Decision applicant pool, and that will benefit these standout students.

Regular Decision is the application plan through which most applications are submitted. While there can be some fairly dramatic fluctuations among different universities’ Regular Decision deadlines, most fall on or around January 1, with the results generally being released in March or early April.

Naturally, Regular Decision is the largest and most competitive applicant pool, and it offers none of the perks of Early Action or Early Decision beyond affording a later application deadline. Thus, prospective applicants should look to take advantage of these early application processes as much as possible in order to maximize their rewards. Even a small amount of preparation and forethought can go a long way toward making the college application journey less stressful and more successful.