Unleash Your Potential
Home What Should I Do This Summer? Experiences from the Field
OurBlog 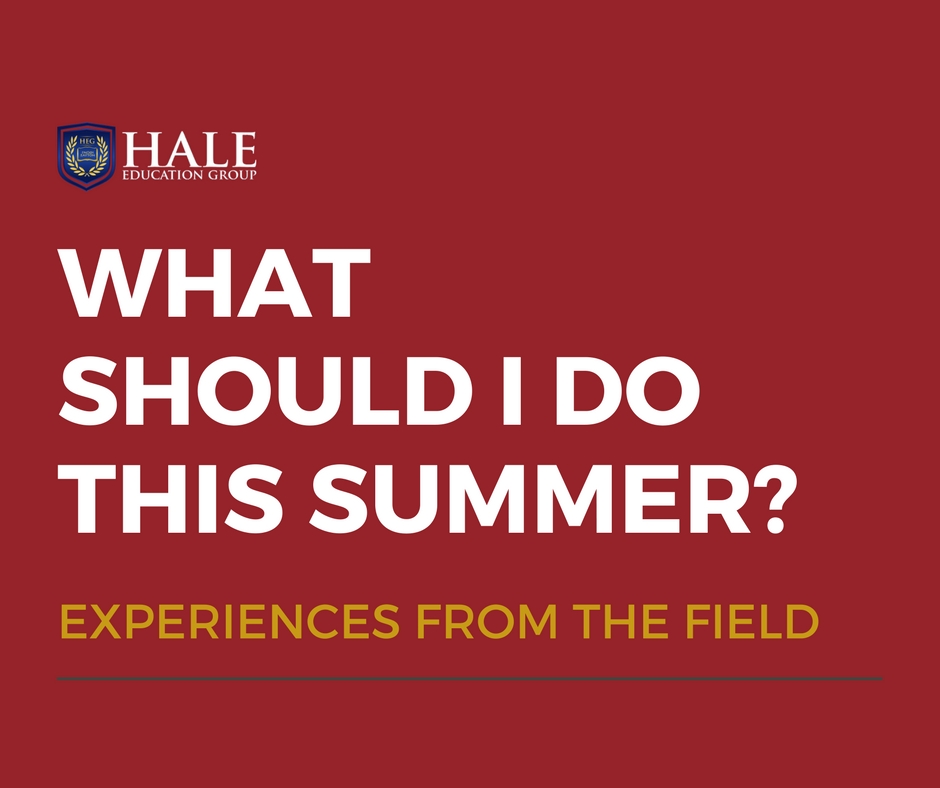 What Should I Do This Summer? Experiences from the Field

Not sure what to do this summer?

Our team shares their most meaningful summer experiences, ranging from sports, to college courses, to international adventures. Read on!

My high school summers were spent at the pool – not lounging in a beach chair working on my tan, unfortunately, but as a swim instructor for kids in my local community. Having swum competitively since the age of seven, I decided to use my knowledge of the sport to help kids develop a valuable skill that they would be able to use for the rest of their lives. Working with students as young as four years old, many of whom had yet to cut the cord with their swim floaties, was a definite test of patience, as my charges gradually progressed from tasks as simple as submerging their heads underwater to more sophisticated freestyle and backstroke techniques. At the same time, however, seeing my students conquer their fears of the water and become more confident in their aquatic abilities was an incredibly rewarding experience that gave me a preliminary insight into education as a profession.

Having started this activity the summer after ninth grade, it was my first real piece of “work experience”, and it substantially influenced future decisions that I made to pursue teaching and education as a profession.

The Experiment in International living: Turkey

“Ekmek means bread. Çay means tea. Peynir means cheese.” I still have fond memories of learning my first words of Turkish over breakfast with my host family in Istanbul. During the summer preceding my senior year of high school, I delved into cultural exploration and began the journey that would lead me to eventually concentrate my studies on the Islamic world. That summer, I participated in a cultural exchange program in Turkey run by The Experiment in International Living. For six weeks, I traveled around Turkey along with 15 other student and two group leaders. Our days were spent learning about Turkish culture and language through activities such as walks in the back streets of Galata and a trip to the ancient ruins of Troy. Our group was diverse in every sense and provided me with lifelong friendships.

The highlights of my experience were my two homestays and a group community service project. While with my host family in Istanbul, I learned about Istanbul’s rich history and Turkish interpretations of Islam. In stepping away from the hustle and bustle of the city, I was exposed to the slower and more traditional Turkish lifestyle while living with my other family in the village of Akkuyu, outside of the southern city of Adana. Everyday I put on a t-shirt and one of my host mother’s colorful shalvar pants before quickly wrapping my head with an embroidered oya scarf  to guard my head from the summer sun, as we worked outside repainting the village school. Our project, though small, allowed us to meet some of the local children and provided us with an opportunity to learn about Turkey’s educational system. Overall, the bond that I built with my host family in Istanbul, in particular, is one that I still value to this day. I have returned to Istanbul several times to visit them and even introduced my Turkish Anne (mother) to my own mother.

The summer before my senior year of high school, I attended a double session at [email protected] I enrolled in two, two-week courses: The War on Terror and Global Development. I remember the courses as being a bit challenging academically, but still manageable - definitely not as daunting as the steep hill leading up to the Brown campus.

Attending [email protected] not only allowed me to immerse myself in an English speaking learning environment (this was my first time speaking English outside a Swedish classroom!), but it also allowed me to make friends from all over the world. These friends would later come to be the biggest influence on my final college list and choice of university, and I still remain in touch with some of them today (nine years later!)

Moreover, while attending [email protected], I was able to visit several other colleges (including Yale University and Columbia University), explore Boston and the New England area, and participate in an informal interview with an admissions officer at my alma mater, Tufts University. I also got my only opportunity to live in a fraternity house and experience what it was like to live in a dorm with a roommate and eat in a dining hall with a never-ending supply of waffles.

[email protected] was what pushed me to finally apply to the US, choose Tufts, and study International Relations. It was definitely one of the best and most worthwhile summer experiences I had in high school.

I spent my summers training with my club soccer team and travelling to tournaments all around the country. Without school schedules to impede us, we would train two-a-days, playing for several hours every morning, breaking for a few hours in the afternoon, and then conducting a second practice in the late afternoons during weekdays. Weekends were for tournaments, which generally took place over a period of two to four days, and could be as close as an hour’s drive or as far as a cross-country flight from my hometown of San Francisco. Summers presented opportunities to dedicate serious time to improving our conditioning and technical skills and, as we grew older, they also constituted the best time for us to play in front of college and Olympic scouts and coaches. As players on a team with high state and national rankings, most of us were hoping to play at the NCAA level and, in some cases, at the professional and Olympic levels. It was, therefore, essential that we dedicate our summers to gaining maximum exposure to coaches and winning national tournaments in order to be identified and recruited.

We were each allowed a few weeks off during the summer months. I looked forward to using those breaks to travel with my family to visit extended family on the East Coast and, occasionally, to go on international trips to different countries.

The summer after my sophomore year of high school, I attended a summer program called Global Scholars in Washington, DC. It was housed at American University but run by an outside organization called Americans for Informed Democracy (now: AMP Global Youth). I had just started to develop an interest in international affairs through my experience with MUN and this program seemed like a logical next step. Where better to explore global issues than in the capitol itself?

The program was seminar-based; I remember spending each morning attending a lecture by a leader in their field - representatives from the World Bank, the president of the Arab American Institute, diplomats from embassies - followed by discussion time, activities around DC, and, finally, a group project where we used what we learned to create our own “campaigns.”

The part I remember most vividly about this experience is the people. The 14 other students enrolled in the program with me were all passionate about global change (and sometimes medicine, and music, and engineering, and linguistics…). It was these students and the exceptional individuals running the seminars who inevitably directed me towards my interest in Public Policy Studies and showed me the  ways I could pursue change. To this day, I still stay in touch with some of the other students as well as the director of the program, who continues to serve as one of my mentors.

Not only did Global Scholars push me outside of my comfort zone (to a new city and new environment), it also gave me a community to return to when I interned in DC a few summers later, while in college. In addition to my outside internship, I was invited to help with the Global Scholars seminars and attend events with the latest group of students, one of whom was applying to The University of Chicago (my alma mater) and had loads of questions. I waved to her on the quad when I saw her there the next year.

While I learned a whole lot about women’s empowerment, inequality, education reform, and sustainability, it was the mentorship and guidance which made this one of the most meaningful summer experiences I have ever had.