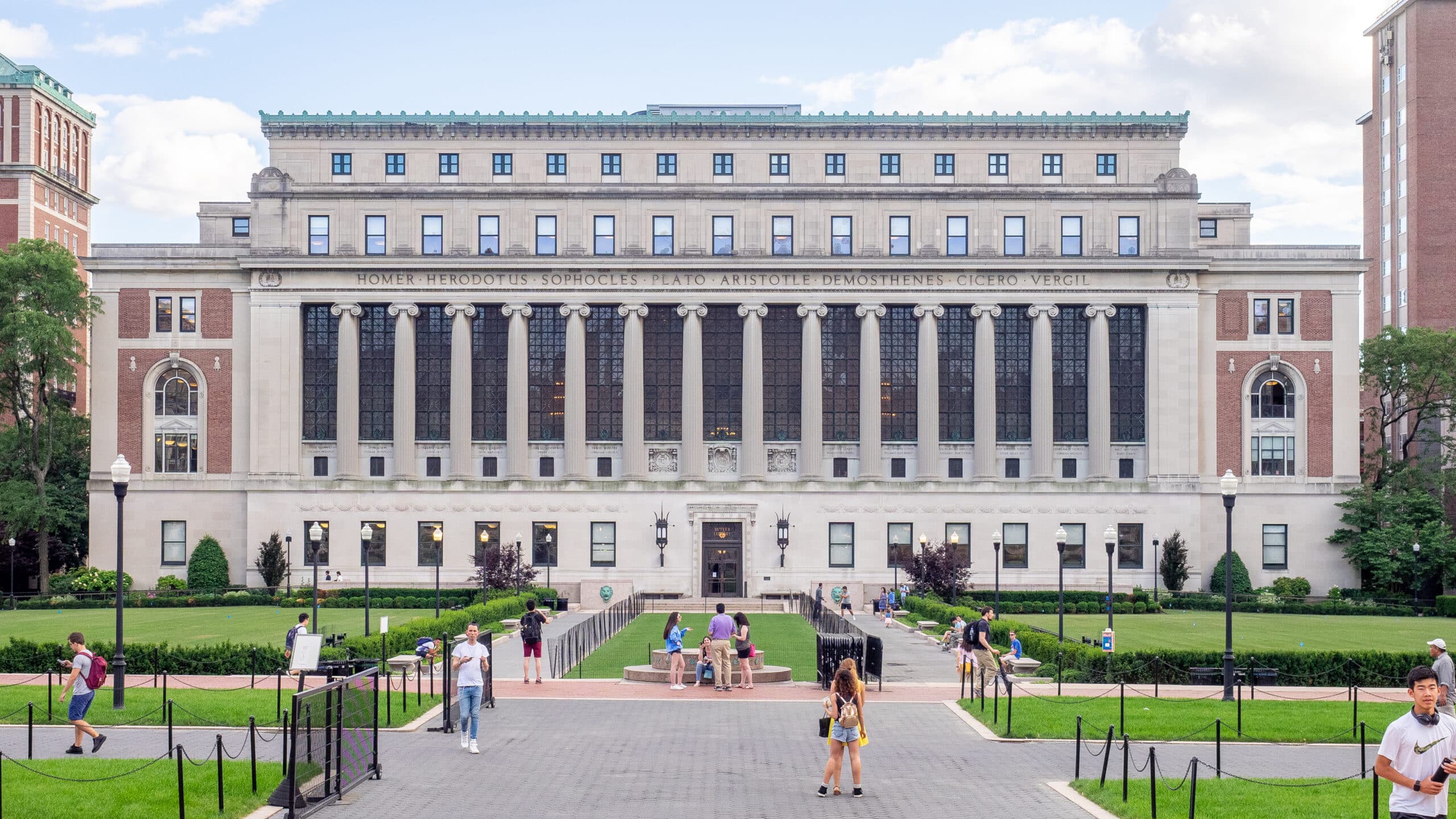 What is Columbia’s Famous “Core Curriculum?”

International students aspiring to pursue higher education in the United States do so valuing North America’s unique educational approach. The UK places primary focus on academic merit when evaluating applicants and requires them to specialize in a fixed track. However, what distinguishes an American experience, from application through graduation, is an intellectual environment that celebrates exploration and demonstrating holistic achievement. In concrete terms, undergraduates are encouraged to study multiple fields, exercise leadership in student life, and pivot, in every sense, as their identity evolves over their four years.

However, American universities are not a monolith. Every institution interprets this educational vision through their unique set of values, traditions, and pedagogical approaches, reflected in the curriculum. The curriculum serves as the blueprint directing the learning experience of all students. Some colleges pride themselves on offering pre-professional development while others champion a “Liberal Arts” education. Some schools offer loose academic frameworks students fill to complete their degree requirements while others require exact courses unchanged in name and content for over decades. Brown University embodies the first model, following an Open Curriculum. However, at my Alma Mater, Columbia University, one finds perhaps the most famous example of the second interpretation, where all students participate in a century-old Core Curriculum.

When undergraduates enter Columbia, they fall into one of two “Colleges:” The Fu Foundation School of Engineering and Columbia College of Arts and Sciences. It is important to know that this designation is academic; the day-to-day life and residential spaces are the same for all students of Columbia University. Within their educational pathways, however, Engineers adhere to a distinct core curriculum in addition to the requirements of their degree. When it comes to Columbia’s famous Core Curriculum, it is students of Columbia College that live and breathe the full experience.

So what is a Core Curriculum and how does it work?

Within Columbia College, the Physics, Economics, and Gender studies major will each spend their four years fulfilling their degree requirements, beginning with foundational courses and eventually exploring niche electives as upperclassmen. However, from first day to final semester, Columbia College students also enroll in a set of courses designated under the Core Curriculum. Columbia’s Core exists under the pedagogical philosophy of the “Liberal Arts” – endowing individuals with knowledge across sciences and humanities, to cultivate versatile critical thinking and broad cultural exposure. Proponents of this learning philosophy believe that such an education prepares individuals to handle the interconnected complexities of the world and to savor the cultural and intellectual legacies of human civilization, a foundation key to unlocking insight into our past, present and future age.

The phenomenon that emerges is an intimate class of twelve, where the astrophysicist, politician and artist engage in lively conversation as they explore the same texts. This phenomenon replicates across each core class’s distinct subject matter and intellectual atmosphere. By graduation, classmates from every background will have worked together to analyze Rembrandt paintings, ponder Calvinist predestination, develop back-of-the-envelope calculations, debate Rousseau’s state of nature, and identify the structure of Mozart’s Le nozze di Figaro. At the podium, Columbia College graduates emerge both uniquely qualified in their arena of study and educated in one Liberal Arts tradition. Consequently, alumni spanning generations can convene and relate to the same texts and reminisce on the same experiences!

So what makes up the Core Curriculum?

Columbia’s Core Curriculum begins freshman year with Literature Humanities (LitHum). This is a year-long sequence that examines famous classical texts, progressing through the foundational works of western literature and thought. Beginning with the Iliad, an either adored or abhorred right of passage, students then venture into the love poems of Sappho, wrestle with the Torah, and ponder ethics and existentialism from Dostoevsky to Goethe. Freshmen will also take Frontiers of Science (FroSci) and University Writing (UWriting) for one semester. FroSci offers fascinating lectures by theoretical physicists like Brian Greene or Daphna Shohamy, Scientific Advisor for Pixar’s Inside Out. UWriting brings students up to speed to prepare for Columbia's rigor but offers the option to specialize in their writing context, from Data Science to Sustainability.

During sophomore year, students will progress from LitHum to Contemporary Civilizations (CC). If LitHum focuses on classical literature, CC provides an introduction to philosophy, diving deeper into the ideas and arguments influencing the social, political and economic systems undergirding the West. As always, coursework begins at the origin of European civilization and ends with contemporary debates relating to capitalism, colonialism, and feminism.

By this point, students may have also started Masterpieces of Western Art (ArtHum) or Masterpieces of Western Music (MusicHum). These semester-long classes, available to both seniors and underclassmen, offer less intensive coursework yet perhaps some of the most enjoyable and enlightening experiences. Spending a semester diving into the cultural and historical influences and interpretive frameworks of music and art, while attending free concerts at Lincoln Center and perusing ancient relics at the Met, offers refreshing and stimulating intellectual respite from the grind. One of my favorite experiences at Columbia came through MusicHum, where I developed my closest faculty mentorship under a young, eccentric and globally-emerging composer. Slowing down to study medieval chants or unpack the structural components of the Pantheon is sure to remind students how great a privilege it is to attend Columbia, where learning abounds in world-class facilities under thought leaders in the most vibrant city in the world.

The Core Curriculum concludes with two Global Core electives. Though Columbia has faced increasing pressure to culturally-diversify LitHum and CC, its incorporation of a Global Core requirement provides fascinating opportunities to diverge from Western hegemony. From Salsa, Soca, Reggae - Music of the Caribbean to Women and Gender in the Muslim World to the Arts of China, Korea, and Japan, this core component allows students to immerse themselves in the legacies existing outside European spheres. A likely realization is for students to recognize how much of Western society profits from appropriating cultural constructs and ideas originating from the rest of the world - a humbling and critical perspective which challenges and re-frames worldviews.

Summary on the Core

The honest reality of the Core Curriculum is that there will be courses and books that students strongly dislike and will not miss. There will be others that pleasantly surprise them and, at most, spark a positive identity crisis that propels them into greater self-awareness and intellectual and expressive freedom. Beyond this, debates abound regarding Columbia’s need to refresh its Core Curriculum, diversifying its selection of texts beyond euro-centric thought. However, it is critical for the most jaded Columbia student to appreciate the opportunity to interact with students and faculty bearing academic and cultural backgrounds vastly different from their own. Likewise, enjoying a scholarly and residential life spanning manicured quads and gardens is a privilege worth savoring before the real-world confronts reality. I personally found that, as I faced pressures of conformity during my final years, such refreshing intellectual environments invited me to cast off career anxiety and simply unleash my love for learning and savor the brilliance of humanity. Though cliché, students who complete the Core with thoughtfulness will find themselves confidently equipped to enter the highest-tiers of society, capable of understanding cultural nuances and references that arise in conversation. While they may not be experts on every subject, their Columbia education will have exposed them to broad enough realms and deep enough ideas that they can chart progress in the most sudden of discussions to leave an impression on individuals of all contexts, transcending global boundaries.

No matter the cynicism, it doesn’t take long for a post-graduate of Columbia University to recognize the rare privilege they once enjoyed in a cosmopolitan epicenter – spending four years musing over the greatest philosophical, cultural, and political minds alongside a group of peers, bearing roots as wide as Alabama to Alexandria.