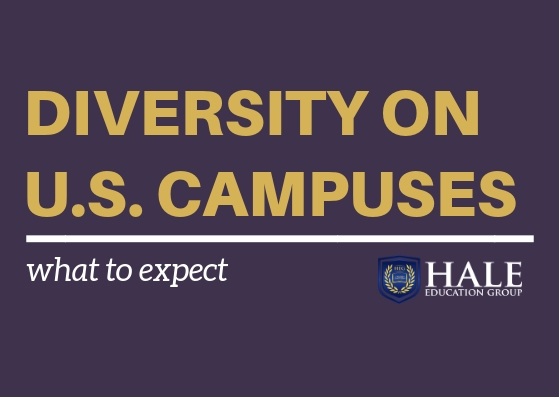 Diversity on US Campuses – What to Expect

It’s no secret that universities and workplaces are becoming increasingly diverse - both in America, and across the world. As globalization pushes people of different nationalities, ethnicities, and socioeconomic backgrounds into closer contact and collaboration with each other, cross-cultural understanding and open-minded communication have become more valued skills than ever.

Universities in the US have responded to this demand by prioritizing the exposure of their students to different groups of people with unique points of view on a multitude of issues. Not only have US universities been steadily increasing their enrollment of underrepresented student populations, but they also have made strides in promoting a range of perspectives and drawing awareness to many pressing social justice issues in their curricula. Given how critical diversity has become to the identities and marketing campaigns of many universities, this blog post will look at the different ‘types’ of diversity prevalent on university campuses.

When many people think of ‘diversity’, this is typically the first type that jumps to mind. Ethno-racial diversity has been exponentially rising at US universities over the past forty years; as per the National Center for Education Statistics, in 1976, only sixteen percent of students at American higher education institutions were non-white, while that number had leapt to forty-two percent by 2015. Today, according to US News & World Report’s 2019 Campus Ethnic Diversity Index, Rutgers University - Newark and University of Nevada - Las Vegas are the most ethnically diverse universities in the country, followed closely by prominent names like Stanford University, Harvey Mudd College, and MIT.

Many universities offer students themed-housing options catering to different ethnic groups; the Asian Pacific American Theme House (APATH) at University of California - Berkeley is an example of this. Typically, these programs do not require interested students to belong to the specific ethnicity in question - the only prerequisite is that prospective applicants be interested in the program’s culture. Often, these programs will also ask their students to fulfill certain course requirements (APATH, for example, requires its students to take a year-long Asian-American Studies seminar), attend weekly meetings, contribute to certain campus events, and participate in community service projects geared toward that program’s demographic. Programs like this not only give underrepresented students a close-knit community of peers with similar interests and experiences, but they also allow for other students to engage with and learn about a culture and set of experiences that may be different from theirs.

A similarly hot-button issue has been faculty diversity at US universities, which has lagged behind the aforementioned trends in student diversity despite assurances that universities are committed to hiring faculty members from a variety of ethnic backgrounds. It remains to be seen how rapidly this issue will be addressed, but the pedagogical benefits of having faculty members with differing lived experiences and knowledge to contribute to classroom curricula and discussions are nigh-undeniable.

For centuries, the realm of higher education was accessible only to the wealthy upper class. Beginning in the mid-twentieth century, however, and continuing until now, this has gradually changed as a university education has become more attainable to those in the middle and working classes.

Today, US universities can be split into two different categories: those who are need-blind, and those are need-aware. Need-blind universities, which include schools like Harvard, Georgetown, and Amherst College, do not factor a student’s ability to pay for their education into their admissions decision. Some of these universities also pledge to meet the full demonstrated financial need of their accepted students, and as such boast a greater amount of socioeconomic diversity on their campuses. Need-aware universities, on the other hand, will weigh a student’s ability to pay into their final decision, thus erecting an additional barrier in the way of students who may come from lesser financial means.

Additionally, greater socioeconomic diversity is often seen at public universities, where the cost of tuition is subsidized by the state government and the price tag can be dramatically reduced for students who are applying from within the state. While many private universities are comparatively generous with the financial aid packages that they give to out-of-state (including international) students, their student bodies are by-and-large going to be disproportionately skewed toward more the more financially well-off.

While there has been significant improvement in the share of lower-income students attending universities in the US, there is still a long way to go; one recent study, for example, showed that thirty-eight universities in the US have a greater proportion of students hailing from the top 1% American income bracket than the bottom 60%.

Should a campus’ diversity influence your decision?

In his study “Does Diversity Matter in the Education Process?”, the University of California - Merced’s Steve Chatman postulates that conversations between students of different backgrounds “led to better understanding of differences in all measures examined: wealth, religion, race/ethnicity, immigrant status, and politics.” Furthermore, Chatman suggests that students may also have a stronger sense of belonging when attending a more diverse university. Considering the global trends toward greater diversity in the workplace, employers are seeking open-minded, critical thinking graduates who are able to understand different consumer perspectives. For this reason, diversity should be an issue at the forefront of a student’s mind when considering universities; not only will students gain critical cultural literacy and communication skills, but they will also have a more well-rounded and fulfilling social experience.

Vanessa Ridley is an educational consultant and a graduate of University of California, Berkeley